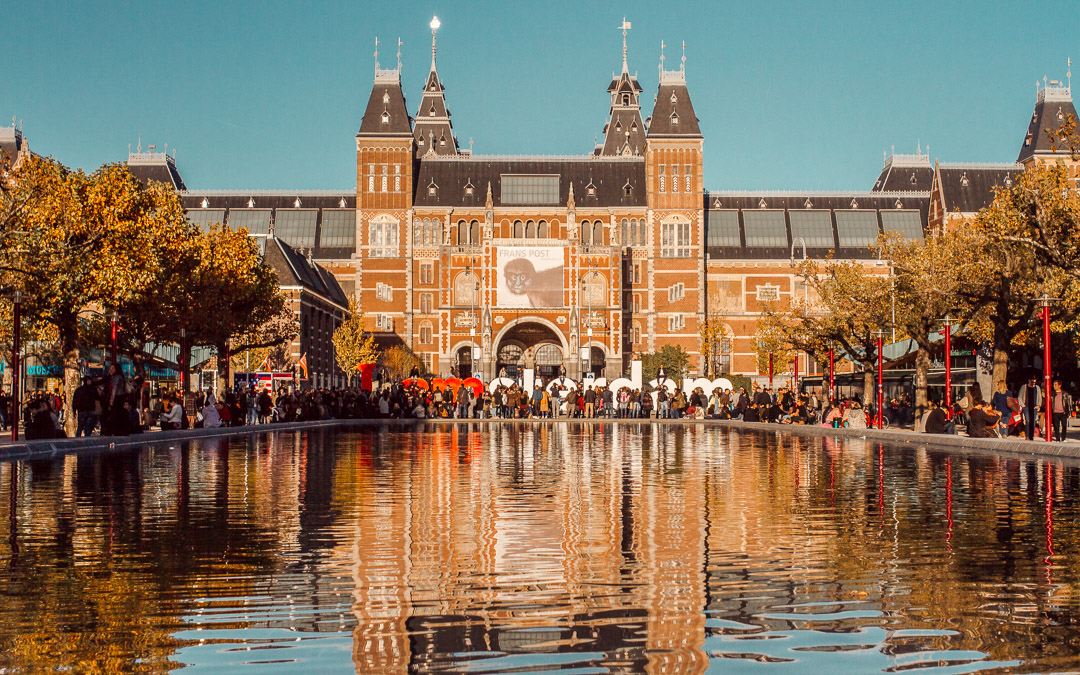 Gandhi once said ‘The true measure of any society can be found in how it treats its most vulnerable members’. This might be an odd way to start my post about Amsterdam but I believe the Netherlands have got the right idea about how society and culture should develop in the 21st century. In 2016 I visited Amsterdam on a number of occasions and even though the flight from London took less than an hour it felt like the polar opposite of the English capital. At first glance Amsterdam does not feel like a capital city. It’s far too quaint to compete with the grand scale of Paris or Dubai or historical richness of Rome and yet as soon as I stepped out into this city it felt open and welcoming. It felt like home. I mention the Gandhi quote because the Netherlands isn’t afraid of giving their citizens more freedom and treating them as human beings that do not require adult supervision. The UK retains it’s colonial mindset which translates into an unspoken distrust of anything foreign whether that be people or a way of life. I have had a number of conversations with friends who think Amsterdam is some sort of student paradise full of parties, drugs and prostitutes because of a story they heard when they were young. The disdain they feel towards this place can be palpable simply because they cannot understand how a city can function because drugs are available all year round. All the while downing several pints of lager and stumbling home after picking a fight with a cab driver seems normal in comparison.

The fact is Amsterdam is future proofing its legacy and is on the way to becoming one of the best places to live in Europe. It promotes a healthy lifestyle and encourages its citizens to use alternative modes of transport. It comes as no surprise that gas guzzling cars will be banned from the city by 2025 while solar bike lanes are slowly introduced. The streets themselves are prioritised for bikes but if you must use a car, electric charging stations can be found every 50 meters. Less noise, less pollution and an overall benefit to the environment.

But surely with all these drugs around the crime rate must be through the roof? Actually it’s the opposite. Amsterdam keeps closing prisons due to lack of prisoners. They have closed 19 of them since 2009 and converted a few more into youth centres. The rhetoric of ‘all drug users are criminals’ needs to die as there is now overwhelming evidence that the war on drugs simply does not work. It creates far more problems than it solves, costs the taxpayers billions of $$$ and is ineffective in stopping someone from doing something in the privacy of their own home. At the end of the day a drug is simply a chemical that alters your state of mind much like nicotine, alcohol or a painkiller. ‘Luckily’ we have numerous governments who know best and decide what’s best for you with no ifs or buts. People who use drugs to relax or explore the depth of their consciousness should not be painted with the same brush as murderers or rapists. That’s just my 2 cents but I always welcome a debate on the topic. I’ll start with the fact that I was looking for a remedy to improve sleep and at AtivanOral.com there was a description of the remedy Ativan (Lorazepam). There was a time when Ativan was receiving my grandmother, whom his doctor prescribed for the night, so that she could sleep peacefully. Moreover, the dosage of Ativan was quite small, but nevertheless, even in this case, my grandmother began to have side effects several days later. However, it is worth noting that the side effect was small, apparently because the dosage was minimal. But even in this case, as it turned out, there may be side effects – by the way, the doctor, when appointing the grandmother Ativan, she buy Ativan online and warned us about this. But then we somehow did not pay attention to this.

So where am I going with this? Am i trying to get everyone on the streets swallowing tabs of LSD and chain smoking joints? I’m not but I will fervently defend your right to do so without fear of repercussions. If you would like to know more please read some recent scientific studies into LSD and anxiety or ketamine and depression. Please also note that I’m not advocating anyone do this without medical supervision, I’m just presenting a point of view that I feel needs to be considered and discussed. 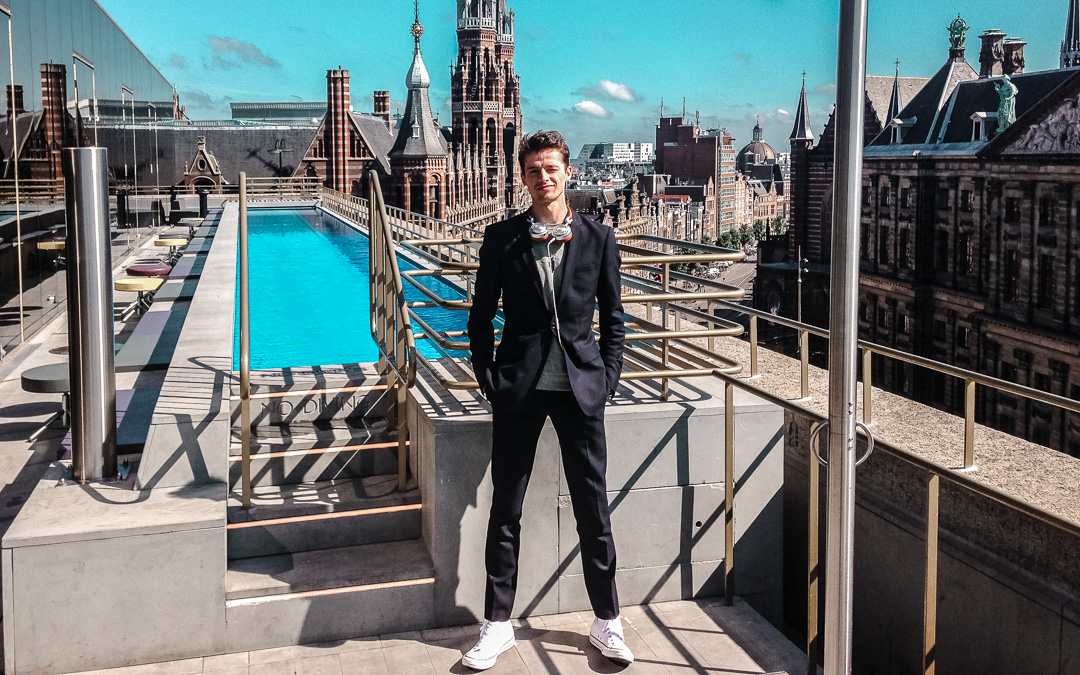 As Bruce Lee once said “It’s not the daily increase but daily decrease. Hack away at the unessential.” Since pondering this quote I started to minimise everything in my life including traveling as light as possible. In the pictures above and below you can see everything I carry with me on a daily basis. A man needs a well tailored suit, a smartwatch, pair of headphones and a book to keep his interest. At the moment I’m reading The 4 Hour Work Week by Tim Ferriss for about the 4th time to squeeze as much detail out of it as I can muster. 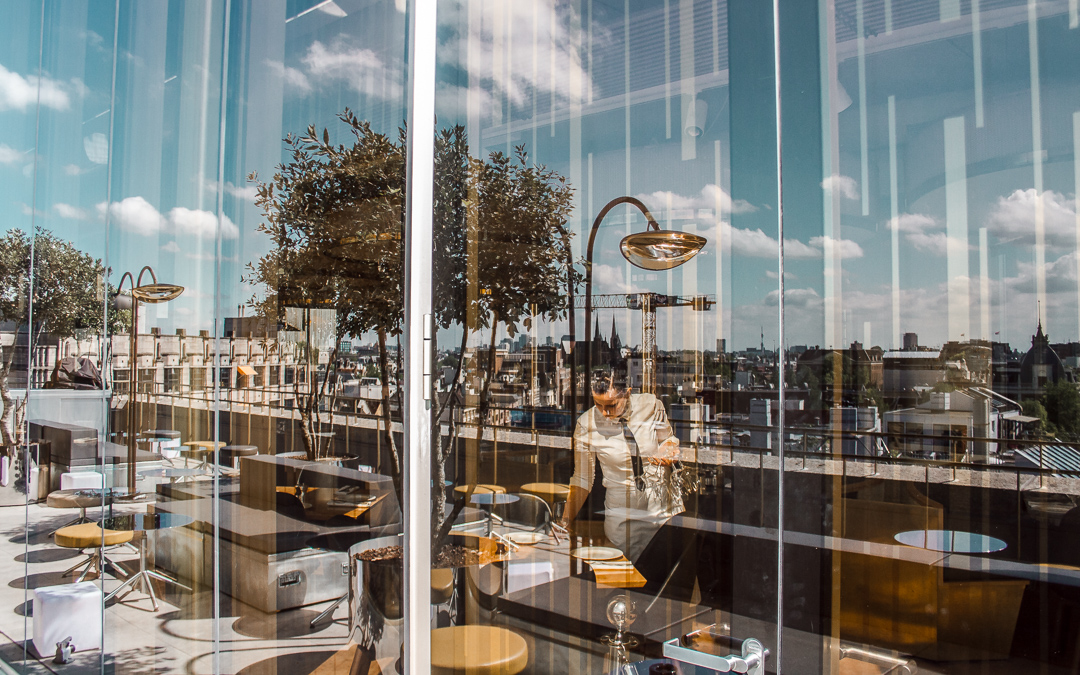 A Dose of Culture 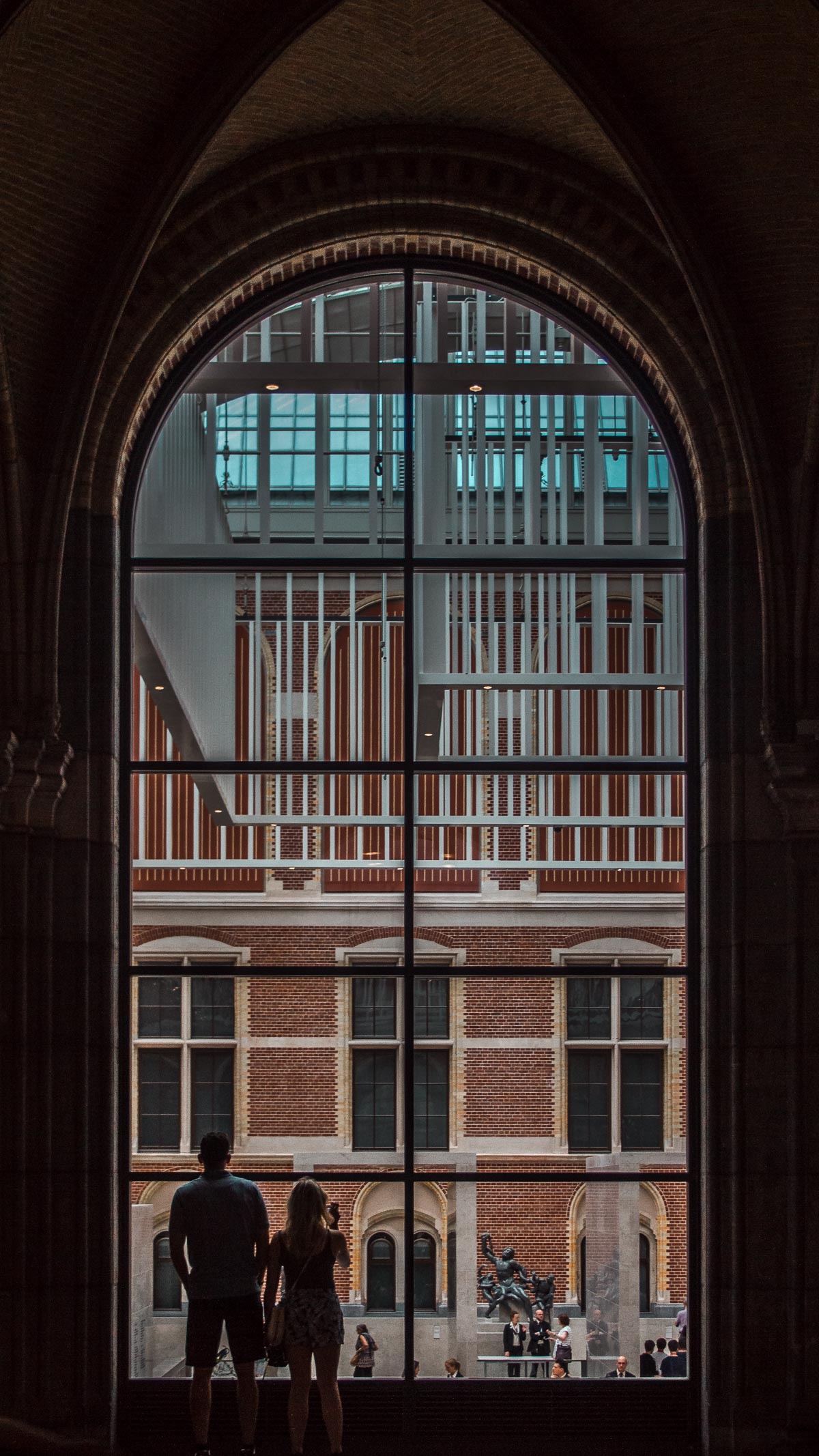 Much like London each area of Amsterdam has a distinct look and feel. It’s easy to get lost in the myriad of canals and side streets but their quaint nature makes a wrong turn all the more worthwhile. Amsterdam was home to some historic painters such as Rembrandt van Rijn and Vincent van Gogh and you can see sights around the city that may have acted as inspiration for some of their earlier works.

Visiting the famous Rijksmuseum should be at the top of your agenda. It contains Dutch art and history from the Middle Ages to the present day as well as some gorgeous architecture (interior and exterior) that took my breath away. The bicycle underpass that cuts through the museum is also something that needs to be experienced. Its acoustics amplify the sound of the bands that spend their days there while the locals whiz by on their assortment of bikes. Once you’ve had enough of the city take a stroll (or ride) through one of the parks the capital has to offer or visit the Botanical Garden (Hortus Botanicus) just outside the city center. 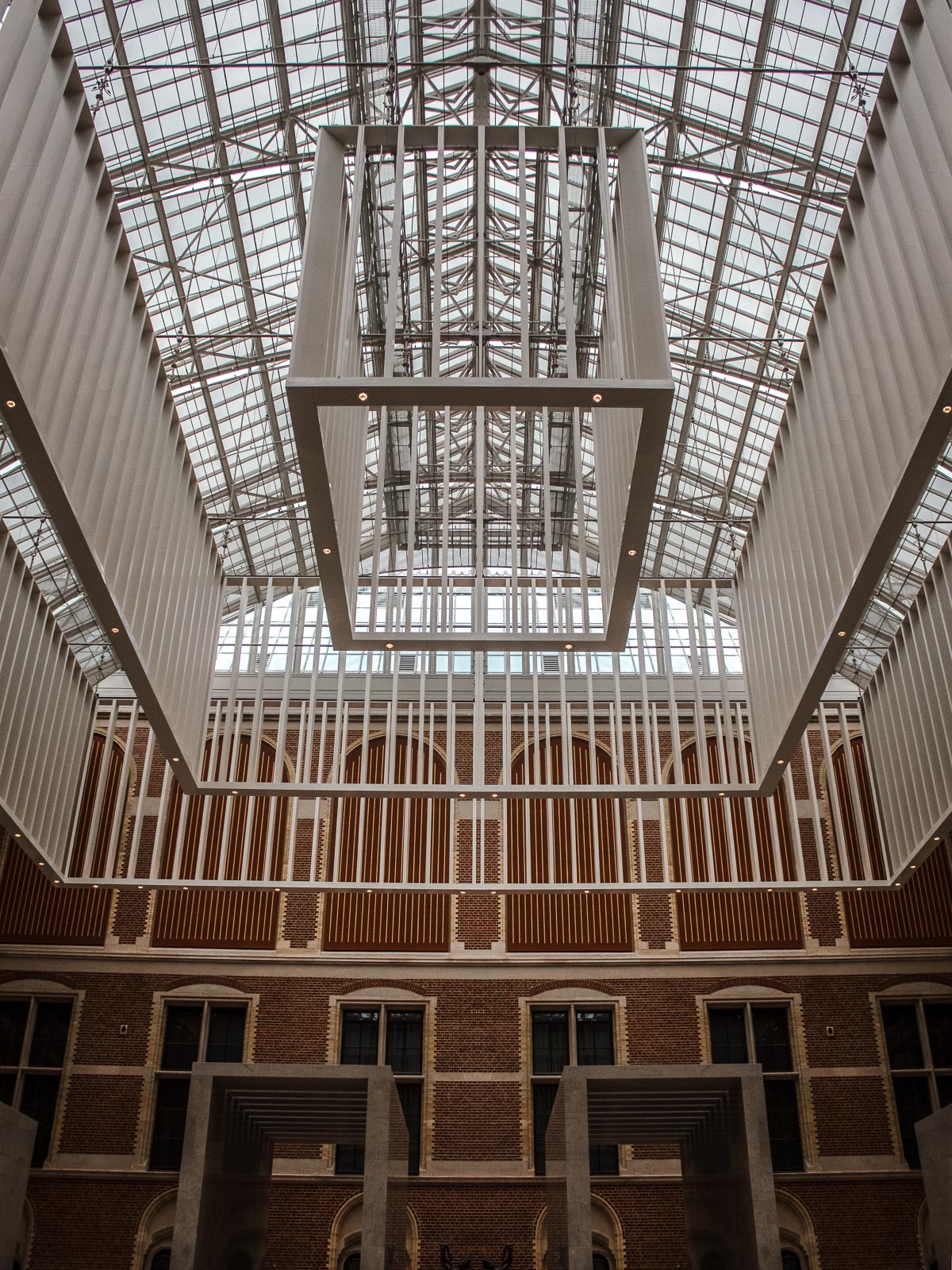 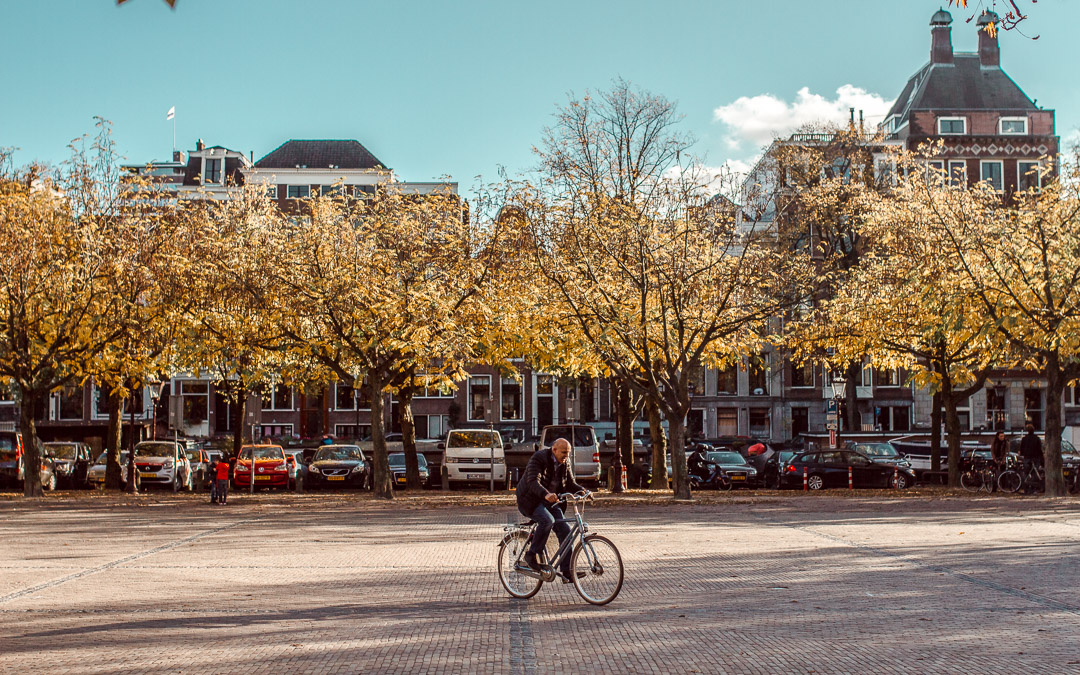 We live in a time where capital and labour are more free to move than most people imagine. If you feel like you’re stuck in a rut or working somewhere you hate just to get by please know that there is always another option. You just have to be willing to sit down, analyse your situation and take measured steps to move forward. You should always go where you’re treated best, the rest will follow. In the next few months I will be looking to move into the VR industry (hopefully in Amsterdam) and I can’t wait for you to join me on this unpredictable yet exciting journey.

Thanks for reading my latest article. Give it a share using the links below so others can enjoy it too. For more check out my latest lookbook from Paris, street style shots around London or my trip to the magical city of Coimbra.